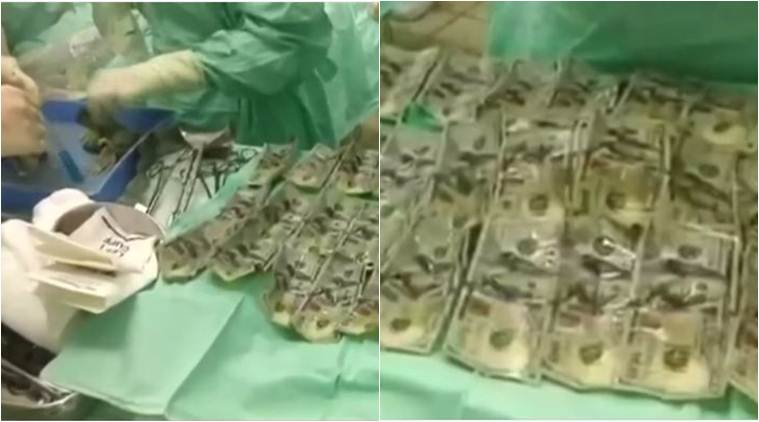 A Colombian woman literally ate through her entire life savings to prevent her cheating husband from getting his hands on the dough, according to reports.

Sandra Milena Almeida, 28, decided to hide her $9,000 nest egg in the house she shared with her husband after she found out he had been unfaithful, Metro UK reported.

But when her husband found the stash and demanded half of it, Almeida gobbled up the money, the site reported.

“They had a big argument, they were yelling and hitting each other,” the couple’s unidentified housemate told Noticias Uno in Colombia. “He was shouting that half the money was his, and she was in a fit of rage. That’s when she swallowed the money.’

The next day, Almeida needed to be rushed to Santander University Hospital in Bucaramanga for severe stomach pains, Metro reported.

They were shocked to discover hundreds of rolled up $100 bills inside Almeida’s digestive system, Colombia’s Radio Caracol reported.

‘We took the patient into surgery for two procedures to clear the blockage, on her stomach and intestine,’ Dr. Juan Paulo Serrano, the hospital’s chief surgeon, told the station.

Doctors managed to salvage around $5,700 after cleaning off the bills and drying them.

“The dollar notes were washed and are in good condition, but the rest of the money was lost because of the gastric fluid,” he added.

Serrano said that the money has been passed on to the police — and a judge will decide how to split it between Almeida and her husband.

Almeida has made a full recovery and was released from the hospital.

Homeowner says 19 vehicles have crashed into his house since 1960

Toddler Has Been Diagnosed With HIV, Genital Herpes and Chlamydia From Uncle that Raped...

Prison Inmate shows Off His Beautiful Girlfriend In His Cell