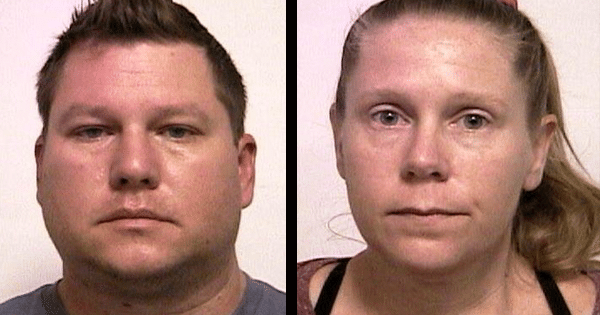 A mother and father in Florida are facing very serious charges after they were accused of forcing their 10-year-old daughter to sleep outside naked.

According to the Suwannee County Sheriff’s Office, Marc and Brenda Marshall have been charged with aggravated child abuse.

A police report shows that Marc told authorities that when he got home from work around 7 p.m. on Friday, his wife told him that his daughter was being punished for urinating and defecating on the floor in the house.

According to the police report, Brenda is not the 10-year-old girl’s biological mother.

Brenda then forced the scared little girl to sleep in the backyard without any clothes on near a section of paved concrete next to the back door all night.

Neither Marc nor his wife gave the child anything to wear, and the couple refused to provide the little girl with any shelter for the entire night.

According to the police report, Marc made absolutely no attempt to check on his daughter, who was found wandering the streets around 7:44 a.m.

The report shows that the child was wandering about a mile away from her home when she was found by a concerned passerby.

Authorities say that when officers showed up to Marc and Brenda Marshall’s home around 8:40 a.m., they still did not know where the girl was.

According to police, the child was very hungry, frightened, and had cuts and bruises all over her feet when she was found.

‘Stupidity at its finest’ draws warning from cops