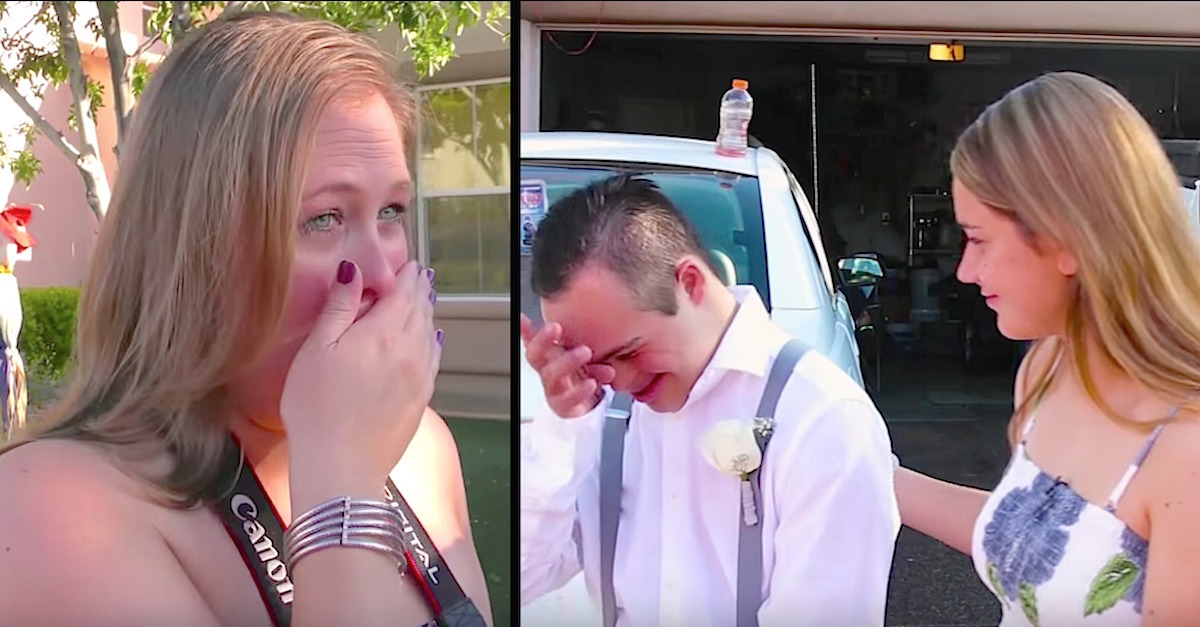 Daniel Rivas, 17, was crushed when he asked a girl to his high school homecoming dance and was turned down. Word got around the Las Vegas area school that he’d been rejected — which could have been soul-crushing but turned out to be the catalyst for the best homecoming date ever.

When sophomore Kylie Fronius heard about her friend’s rejection, she asked him to the dance with balloons and a big sign; video capturing the sweet moment eventually got the attention of local news station FOX5 Las Vegas.What makes this story different from all of the other “promposal” videos proliferating the internet? Rivas has Down syndrome, so his emotional acceptance of Fronius’ request for a date was especially moving. “I don’t think of kids that have a disability as being different,” Fronius told FOX5. “I think of them as just being a normal person learning in a different way.” She told FOX that she didn’t want to go to the dance with anyone but Rivas.

The story touched so many hearts at FOX5 that they decided to send their Surprise Squad out to help the couple enjoy a particularly spectacular evening.The Surprise Squad joined the couple at the Rivas home while they were preparing to leave for dinner. Rivas and Fronius thought the FOX crew was there just to follow up on the earlier story about her proposal; they graciously answered questions while Rivas’ mother stood to the side, crying quietly.

Then the Rolls-Royce pulled up.“We want you guys to arrive in style,” said FOX reporter Monica Jackson.The car and driver took the Shadow Ridge high school students to an upscale restaurant for dinner then delivered them to the homecoming dance, where they were welcomed by cheering students lining a red carpet.But the Surprise Squad was just getting started. The Rivas and Fronius families were each presented with a trip to Disneyland; Rivas was given a $10,000 scholarship to help him achieve his dream of culinary school, and Fronius was honored with a Nissan Sentra from a local dealership.

“All you had to do was watch the news story [about the proposal], and you just saw a young lady with a huge heart,” said Don Forman, United Nissan dealership owner. “She was inspirational.”Rivas couldn’t agree more. During the ride in the Rolls-Royce, he put his hand over his heart because it was thumping so hard. When Fronius asked him if he was happy, he responded with one emotion-laden word: “Yeah.”

Is ‘hot’ 4th grade teacher causing a distraction in the classroom?