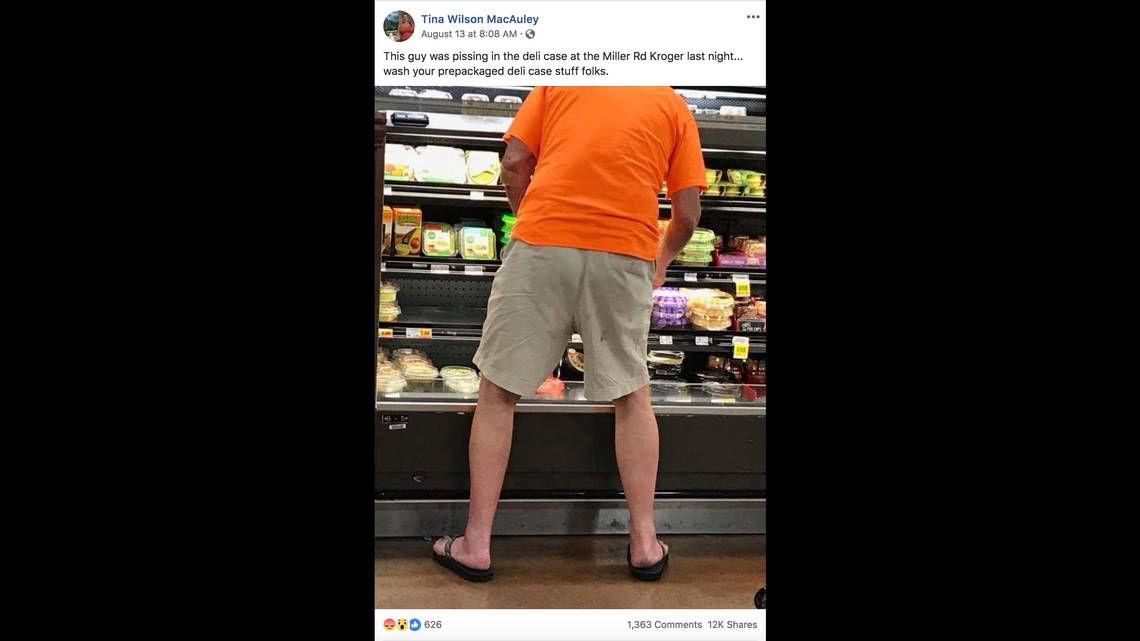 A Michigan man faces charges after he was caught peeing in a grocery store display case, according to police.

The suspect said he just couldn’t hold it.

The 69-year-old suspect hasn’t been identified, but police said they cited him Sunday nightafter someone snapped a picture of him urinating onto pre-packaged hot dogs in a Kroger grocery store deli meat display case in Swartz Creek, MLive reports.

The citation came after the shopper alerted grocery store workers about what the man was doing, according to police. Then a photo was captured and the store called police, WJRT reports.

“He said ‘I did it. I couldn’t hold it anymore,’” said Metro Police Authority Lt. Joel Grahn, according to MLive. “He claimed to have a prostate issue and then he claimed he has nerve problems that cause him to go more frequently.”

Enlarged prostates — which can trigger a frequent and unexpected need to urinate — impact one in three men in their 60s, and about half of men in their 80s, according to Harvard University’s medical school.

A Michigan woman posted a photo of what appears to be the incident on Facebook — and she had some advice for shoppers at the Kroger location.

“This guy was pissing in the deli case at the Miller Rd Kroger last night,” she wrote, in a post that has been shared thousands of times. “[W]ash your prepackaged deli case stuff folks.”

Workers at the grocery store have tossed the impacted deli products, and have done a deep clean of the area, WJRT reports.

Kroger spokesperson Rachel Hurst told MLive that the store had a restroom in front. Hurst said that, in addition to the deep cleaning, all the “matting, tags, and product were discarded as well,” MLive reports.

An Illinois woman faced similar charges for a similar incident in 2016 — and at a different location of the same store, the Peoria Journal Star reports.

Police said the 45-year-old woman dropped her pants and began peeing in a freezer in the Kroger pizza aisle. A witness was “shocked and appalled,” but the woman put her finger to her mouth “as if to hush him” when he confronted her, the newspaper reports.

Her excuse was much like the Michigan man’s: She “had to go,” she told police, according to the Journal Star.

Muhammad Ali gave directing tip to filmmaker Leon Gast for documentary ‘When We Were...

Aftermath of Freddy Krueger Gunning Down People at Halloween Party